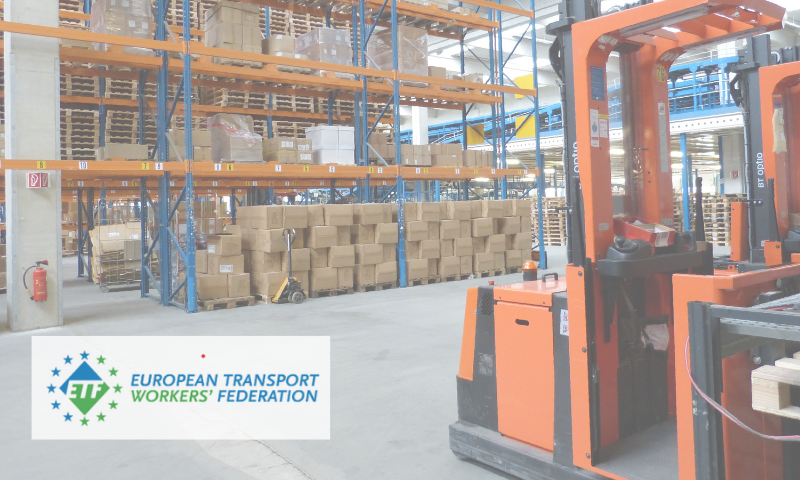 Amazon – Fighting back for Fair Logistics

The US digital and e-commerce giant Amazon may be known for its disruptive business model, hailed as an innovative success story, but when it comes to workers rights and conditions, the company’s modal is hardly new or innovative. In fact, the treatment of workers belongs more in the 1920s than the 2020s.

Seeing transport workers constantly monitored by tools of digital surveillance and control, toiling under precarious contracts, often without security, for poor pay, ETF and our affiliates have no choice but to step up action and fight back against the exploitation of workers in the logistics and e-commerce sectors.

Famously anti-union, Amazon routinely moves against worker organising efforts, or jettisons any responsibility for its workers through subcontracting throughout the supply chain or offering work contracts with little protections. We don’t need to reiterate the working conditions at Amazon here – barely a week goes by without reporting on workers forced to urinate in empty bottles thanks to overwork or bogus self-employed drivers pushed to the limit, or indeed the company’s efforts to avoid paying their fair share of tax or environmental impact. With the mass awareness over the practices at Amazon, the time now is to fight back and secure a better deal for transport workers – stopping the spread of abusive practices as the ‘new normal’.

The Italian case: example for the world to follow

This year we discovered that unions can – and will – succeed in making the logistics sector fair for workers. On 15 September, Italian transport unions FILT-CGIL, FIT-CISL and UILTRASPORTI, alongside the federations representing atypical workers, signed an industrial relations protocol with Amazon, establishing that the company must recognise them as social partners. The company also agreed to comply with the rules laid out under the Italian National Collective Labour Agreement for Logistics, Freight Transport and Shipping.

The signing of this agreement didn’t appear out of thin air – it was a result of a long struggle by our Italian trade union affiliates to secure good working conditions and the proper place for unions as social partners.

Indeed, on 22 March 2021, the entirety of Amazon’s logistics supply chain went on strike for fair working conditions. Facing Amazon’s refusal to negotiate a supply chain Collective Bargaining Agreement (CBA) that also covers subcontractors, workers took this action. The reasons leading to the dispute were twofold: the unions wanted to secure recognition of the trade union at the national level as the subject with which wages and working conditions were negotiated. The second reason, where discussions are ongoing, are to secure agreement on working hours and wages with the companies that have contracts with Amazon.

The power of collective worker action was proven. Thanks to the historic strike, the Italian minister of labour, Andrea Orlando, intervened in the dispute, negotiations were resumed and the protocol was signed. Alongside recognition of the unions as negotiating parties, and terms of employment, the agreement also includes a preventative comparison in regards to new productive settlements, as well as the quality of employment. Already, the agreement has led to the payment of an employee bonus.

Yet, be assured, the fight goes on, the next step is for Amazon to sign a CBA covering subcontracted workers.

For ETF, the agreement should serve as an example to the rest of the world, and will be the first of many more to secure workers rights, and the place of unions in the process of collective bargaining.

The rise of the copycats

Amazon’s questionable business practices and treatment of workers may be more and more well-known – but the company is not alone. As the standard bearer of worker exploitation, it is inspiring many Amazon copy cats, who are appearing all over Europe.

In Denmark, shocking revelations over the working conditions at online supermarket business Nemlig have underscored the threat over the spread of the Amazon model. The Nemlig model is all too familiar; constant monitoring of warehouse and delivery workers, the forcing of workers to work faster and harder, bogus self-employment, even the use of former military personnel, hired to push workers harder.

The abusive business model the company embraces relies on pushing costs down as much as possible. Workers are officially hired as an independent – but in reality, have to work for one company: Nemlig. The company then decides on payment, working time, delivery routes. Bogus self-employment in a nutshell. Thanks to these practices, the 300-400 delivery drivers at the company earn half of a normal Danish salary.

On top of this, the company relies on hiring migrant workers, many of who do not understand Danish labour laws, unions or normal working standards. While not a union busting tactic in itself, by doing this, the result is the same. A work force scared of standing up for their rights, unaware of how unions can fight back.

3F, the Danish trade union and ETF affiliate has been stepping up the pressure on the company, helping tell the stories of workers, pushing the company to sign a CBA. In fact, 3F have been picketing outside the one of Nemlig’s largest warehouses in Brøndby since June, demanding the company does right by its workers, come to the table and sign an agreement.

As a European trade union movement, we cannot allow the spread of these practices. Indeed, the fear is that, without fighting back, these working conditions will only spread to other sectors.

As we step up our work in the sector, solidarity and common action – across borders and sectors – will help ensure success. This is why on 26 October trade unions will gather in Brussels at the extra-ordinary ETF membership meeting Fight4FairLogistics. As trade unionists, we know we can use our power and make a positive impact on workers lives when we come together in common cause.

Together, we will meet as a European trade union movement, to develop knowledge, and strengthen solidarity in the fightback against Amazon and all the copycats. Success stories will be told; stories of practices these companies deploy told; common purpose and unity built.

As multi-national logistics and e-commerce companies operate across international borders – spreading their exploitative practices, the necessary response from workers is clear: we must unite as a European trade union movement to fight back. ETF remains at the front; fighting back for fair transport!