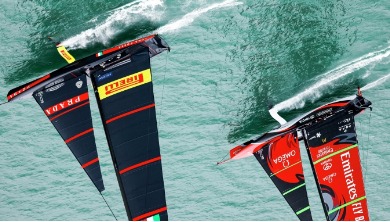 “Sporting events” are an opportunity for confrontation, comparison and fair competition, to outdo each other, individually or in teams, in competitions that are based on time, speed, precision, strength and skills

Could it be that such events are “predominantly ” sports events with the obvious aim of providing a means to convey advertising messages, improve the “corporate reputation”… and “predominantly” increase sales and turnover?

Obviously the latter. No one is shocked, but we’d like to know more.

The America’s Cup of the antipodes, overturning the foothold, becomes an opportunity to move against the current the point of observation: the “upside down” of the child who does not see “the King’s clothes”.

Of the 49 main companies that sponsor the America’s Cup, 20 are in the OpenCorporation Observatory and for half of them there is also the 2020 rating.  Some of these: AIRBUS SE  EMIRATES   SIEMENS AG  we had actually crossed at the “World Corporate Chess Championship“.

Others: INEOS GRENADIERS EMIRATES GAZPROM Groupama Total  those more interested in a “popular” public we find them on the shirts of other sports, in these very days, eg. of the cyclists of the Tirreno-Adriatico. The partners of the America’s Cup and the Teams are spread out over all economic sectors, but they mainly represent the luxury segment, out of the 49 sponsor/partner companies classified: 7 belong to the food sector (Agriculture, wine, champagne, beer, soft drinks): 18 to the industrial sector (Manufacture of watches, luggage, optical instruments, engines, plastics); 9 to commerce, transport and tourism (Wholesale of textiles clothing footwear, transport, Hotels and Restaurants) and 15 to services (ITC & Business Services). Altogether they have an enormous weight (629.101.557 Euros turnover) and employ 1.395.588 workers!

And the main Team Partners:

Finally, given that predominantly the 49 America’s Cup sponsors represent “luxury” companies, how rich will their budgets be?

The return on capital employed is measured by the ROCE (return on capital employed), an economic index of the efficiency and profitability of a company’s capital investments. According to analysts it should be at least twice the current interest rates. More than a third of these companies are so “opaque” that they do not allow the calculation of balance sheet indexes; among those that are “transparent”, more than half have a positive result and 22.5% have a double-digit positive return!